A ride through the mysterious past – ferries from Greece to Turkey are famous in the region, taking travellers to and from these countries which share a past in the age long gone. Ferries seasonally carry the avid passengers from one country to the next, from the Aegean Sea to the Mediterranean.

Fethiye, Turkey, is the harbour that stands on both seas, while Rhodes is a small Greek island on the Aegean Sea, known as the island of the knights. It is a renowned travel destination in Europe, perhaps the most famous, due to the presence of one of the seven wonders of the ancient world, its pine and cypress forests, its rocky shores, and the tiger moths that gather every summer. Rhodes has a unique heritage which is accumulated from its time as part of the Greek, then Persian empires, and finally, as part of the empire of Alexander the Great. It has been occupied by Islamic forces and the Byzantines but was finally ruled by the Knights Hospitaller. Thus Rhodes has sites which are monuments to all these eras of its colourful past. And what a better starting point for this journey than the harbour of Fethiye in Turkey.

Fethiye itself is bestowed with archaeological marvels of the past, is located on the ancient city of Telmessos, an important city of Lycia, a geopolitical region with its own distinct language. One can see remnants of the Hellenistic period, like the remains of an old theatre and the Tomb of Amyntas with its breathtaking carvings. In between is the deep blue sea, with breathtaking views. A one way over this blue sea to Rhodes, Greece takes about ninety minutes to complete. 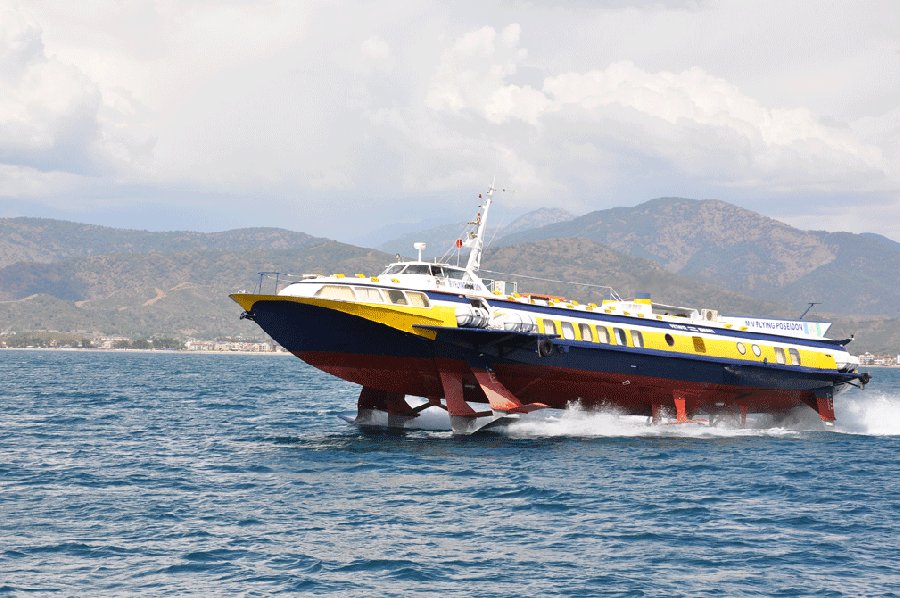 There are several options available for the visitors, including a one way trip for 50€ offered by Farout, return on the same day costing 60€ and return on a different day amounting to 75€ in the peak seasons from May to October. Booking is to be made at least one day before travel and passengers must have valid passports and relevant visas to enter Greece. An additional cost of 10€ is to be paid on departure from Rhodes Island. The visitors are required to arrive at least half an hour to 45 minutes before their time of departure.
The amount charged is worth its while, and the ferries are comfortable and pleasant. For those with the sailing spirit, the ones who love to be on the sea knowing their final destination will be as delightful to explore as the starting point, these ferries are a great option, so book your tickets soon!
To see the full ferry schedule see the Fethiye to Rhodes ferry page or go to the booking manager.